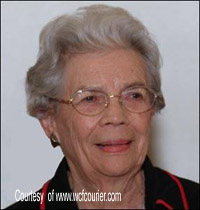 Nancy Ellen Jones was born July 21, 1921, in Wheatland, Wyoming, the only child of Isaac Benson (I.B.) and Maude Roys Jones. Less than two years later, her mother passed away. Her father, with a University of Nebraska engineering degree, traveled through the far west, Mexico and Latin American to work on irrigation projects. When Nancy was five, he arranged for her to live with his sister and brother-in-law, Margaret and Carroll Lewis in Peru, Nebraska. Soon after Nancy moved to Peru, they presented her with a new baby brother, John. In 1942, she completed her B.A. Degree and graduated from the State Teacher’s College in Peru.

In September of 1942, she married LeRoy H. Redfern of Peru, whom she had known since the age of 5 when she moved in across the street from his family. They walked to school together as kids but did not take a romantic interest in each other until the high school band, in which both played, took a trip to Lawrence, Kansas for a national music contest. After that they began to date and were married a few years later. LeRoy left almost immediately after the wedding for a stint in the Navy and while he was overseas, Nancy taught history and English in Brock and Loup City, NE. After the war the couple moved to Ann Arbor, MI where LeRoy attended the University of Michigan Law School.

The Redferns decided they wanted to settle down in the Midwest and they preferred a town with a college presence. After a thorough search, they selected Cedar Falls and moved here in July of 1948. LeRoy opened a law office and Nancy embarked on what would become a long career as a homemaker and mother of their four children and as one of our town’s most prolific public citizens. She is justifiably proud of her four children and their accomplishments; the eldest, Donald (Cedar Falls), is an attorney and served in the Iowa State Senate, Richard (St. Paul, Minnesota) is an accountant, Anne (Excelsior, Minnesota) is a special education teacher and the youngest, Sallie (Temecula, California), is a physician. Nancy can also be proud of her contributions to our community and it is for those that she has been chosen as the recipient of the 2011 Peter Melendy Award.

While her children were young, Nancy was active in volunteer work and in community service projects including the presidency of two P.T.A. units and as a leader of Boy Scout, Brownie and Girl Scout troops. As the years went on, she became a Board member of both the Goodwill Auxiliary and of the Black Hawk-Buchanan Operation Threshold. In addition, she was active in the First United Methodist Church where she held many offices including six years on the Board of Trustees.

Her interests in the arts, culture and history led her to a number of other activities, including becoming president of the Tuesday Club and of her local P.E.O. Chapter. In 1967, she began serving on the Board of Directors of the Cedar Falls Historical Society. She was the membership chairman of the Society for 3 years (during which she managed to enlist nearly 1,000 members ), the secretary for 3 years, vice-president for 2 years and, beginning in 1976, the president for 4 years. During her work with the Historical Society, she was involved in many significant projects, including the establishment of the Hearst Center and the Carriage House addition to the Victorian Home.

However, the project which many would consider her most significant was the establishment of the Ice House Museum. The building, which had been used as a boat storage facility for many years, was scheduled to be demolished because the weakness of the roof made it unsafe.

Nancy’s involvement began in November of 1976 when she wrote a letter to the Cedar Falls Record saying, “We should be working to preseve, not demolish so unique a building.” Many Cedar Falls citizens agreed. She then undertook a far-reaching campaign to raise the funds necessary to preserve the building. She convinced the Community Development Task Force to recommend to the Cedar Falls City Council that $30,000 in federal funds be used for restoration of the building if matching funds could be raised from the community. She then personally spearheaded the finance drive to which more than 500 businesses, individuals and organizations eventually contributed and, by the spring of 1978, over $70,000 had been donated. This was sufficient not only to make the necessary repairs to the building but to begin the task of outfitting it for use as a museum.

Not only was she the force behind preserving the building, she personally applied for it to be placed on the National Register of Historic Places, which designation was received in October of 1977. After the museum was established, she then served for many years as Chairman of the Ice House Museum Board and led the effort to gather donations of artifacts and items for the museum displays.

During her decades of hard work and community leadership Nancy Redfern has received a number of awards and recognitions, including the 1978 Representative Citizen of Cedar Falls award; a Governor’s Leadership Award at the 1979 Community Betterment Recognition Luncheon in Des Moines; an award from the Cedar Falls Lions Club in 1981, when she was presented a plaque recognizing her work in the creation of the Ice House Museum; a Certificate of Merit in 1982 from the Iowa State Historical Society for outstanding achievement in the cause of local history; a Certificate of Commendation presented by the American Association for State and Local History for her efforts to preserve Cedar Falls history; and the 1998 Petersen/Harlan Award from the Iowa State Historical Society for her long-term, continuing contribution to Iowa history.

And now The Cedar Falls Civic Association proudly joins the list of those honoring Nancy Redfern by choosing her as the recipient of the very first Peter Melendy Award.