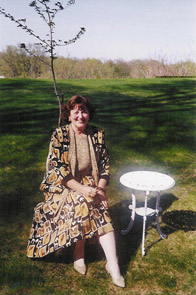 The 2012 Peter Melendy Distinguished Community Builder Award is presented to Judith Cutler for extraordinary dedication and service to the enrichment of the lives of the citizens of Cedar Falls.

Judi’s background in our community was first noted on July 23, 1974, when she was employed by the City of Cedar Falls as a secretary in the Planning Division, later restructured as the Community Development Department (CDD). The CDD became a division of the Department of Developmental Services when the City reorganized its structure in the mid-1980s. Judi was in that position until December 7, 2001 (27 years of service). On May 9, 2005, she was hired as Building and Services Coordinator at the Cedar Falls Community Center, a position she held for more than 7 years, until September 21st of this year.

In addition to her many years of professional service to our community, Judi’s volunteer endeavors are vast. As one of her nominators wrote: “She is the go-to person when there is an activity or event that can improve the quality-of-life for our community and its citizens. Judi knows how to get things done, and she will frequently take the lead on a project to ensure its success”. The information provided in this booklet only exemplifies the broad range of her contributions, and many activities overlap in years of involvement.

Perhaps Judi is most readily remembered by many for her contributions that led to formation of Cedar Falls’ largest ongoing cultural and economic annual Celebration. In 1975, Judi, Rosemary Beach, and Tom Klemuk agreed to form a committee to organize the Cedar Falls United States Bicentennial Celebration. Each city in the State of Iowa was to choose a summer date for their part in celebrating “Happy Birthday, America” and Cedar Falls chose July 27, 1976, thus beginning the tradition of holding the Sturgis Falls Celebration on the last (full) June weekend annually. The organizers met weekly to develop their plans, enlisting the support of individuals, local organizations, City government, the Chamber of Commerce, the University of Northern Iowa, the State of Iowa and, very importantly, the Cedar Falls’ business community. None of the three original organizers anticipated that the Celebration would continue beyond 1976. However, the event was received so enthusiastically by residents, and brought with it such a sense of pride in our community, that it was repeated in 1977 and became known as the Sturgis Falls Celebration in honor of William Sturgis, who founded the community of Sturgis Falls (now Cedar Falls) in 1845. Judi remained on what became the planning Board for well over a decade. By 2000, by then an ad-hoc member of the Board, she brought fresh and creative ideas as well as long-term wisdom to her role.

Judi was among those who were instrumental in the process of establishing the first commissioned gift of public art to Cedar Falls. In summer 1998, during the RAGBRAI XXVI overnight stop in Cedar Falls, Judi, along with Rosemary Beach, helped arrange for the food vendors in Overman Park, one of the important sources of funding for our community.

A few months later in fall 1998, the process to establish public art began when Jan Andersen, then Director of the Cedar Falls Tourism and Visitors Bureau, was informed by the event’s sponsor, the Des Moines Register, that Cedar Falls would receive reserves. The event’s sponsor encouraged our community to use those funds to purchase a “long-lasting contribution.” Additional funds donated by Jim and Cecelia Mudd enabled the commissioning of “Gateway to the Trails,” the public art that is located in Peter Melendy Park at First and Main Streets, and was, officially, dedicated in June 2000. Judi became a member of the newly formed Public Art Committee of the Cedar Falls Art and Culture Board formed in 2000 to finalize the purchase, provide oversight and installation of the sculpture, along with maintenance of this and future works in the public art collection.

Judi was involved in the City’s efforts to create our Hotel/Motel Tax Referendum that eventually led to the formation of the Cedar Falls Tourism and Visitors Bureau Welcome Center on Hudson Road south of Viking Road in Prairie Lakes Park. Judi was a natural choice because of her involvement with the Tourism Bureau since its inception and for all that she could offer due to her broad overview of the community. Judi became a member of the Building Committee. Many steps later, the Welcome Center became a reality and opened in 2004.

Judi served in many capacities in the Historical Society, including being on the Board for two terms, chairing the Wyth House Council from 2002 through 2006, serving on the Executive Committee, chairing the Membership Committee, working with the Little Red School Advisory Panel to organize the Antique Show for many years, and taking responsibility to arrange for decorating the enormous pine tree in Overman Park to enhance the annual holiday celebration which, for many years, began the first weekend after Thanksgiving. In addition, Judi located grant funds to enable engaging the services of Tom Klemuk, Interior Decorator, for the renovation of two rooms on the second floor of the Wyth House in 2005 (shortly before Tom’s death).

Judi worked on the College Hill Arts Festival Buffet Committee for many years and was Co-Chair from 2005 through the summer 2012 with Chris Crews-Larsen. Each year, participating artists, patrons, and many others look forward to the CHAF buffet and its ambiance.

In the late 1900s, interest arose to establish welcoming signs at the north and south portals of the City. Judi was on the original planning committee, along with others who represented the City, the Tourism Bureau, and the University of Northern Iowa. She was an asset because she knew of possible locations to place the signs and, as discussions began, Judi’s knowledge of the City provided important ideas about how the signs could be financially supported.

Judi strongly supported the City’s efforts to become a healthier community by applying for and receiving identity as one of Iowa’s first blue Zone pilot sites. As Coordinator for the Cedar Falls Community Center, she fully supported Mayor Crews’ enthusiasm for the project and encouraged others to do so.

Judi now lives with her husband, Michael Blough, in Sebring, Florida. Her daughter, Amy Oates, and granddaughter, Allison Oates, live in San Clemente, California. Judi will be returning to Cedar Falls whenever possible and will always be a part of our community’s activities.