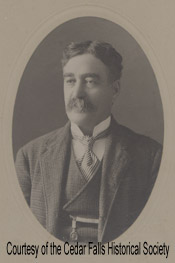 Quotes are excerpted from Since I Started for the War: The Letters and Diary of Solomon Barrick Humbert Co. B, 31st Iowa Volunteer Infantry by Jeanine Humbert Johnson and Cynthia Huffman Sweet, (Cedar Falls, Iowa, 2007).

Solomon Barrick Humbert was born in Potter, Yates Co., New York on 30 May 1842 and grew up in Lyons, New York, the eighth child of Georg Humbert and Eva Bley, immigrants from Hatten, Alsace, Germany and Climbach, France, respectively, who arrived in New York on board the ship Sully from Havre, France, on 15 July 1829. In 1859, the family moved from Lyons, New York to the little town of Cedar Falls, Black Hawk County, Iowa, where Sol and his father farmed west of town.

At the outbreak of the war in April 1861, Solomon became a member of the Cedar Falls Reserves, the second Cedar Falls company formed. The following year at the age of 20, he made the difficult choice to enlist, a particularly painful choice in that he was an only son, torn between his duty to his family and his country.

The Reserves became part of the 31st Iowa Infantry. They participated in their first battle on 11 January 1863 when they took part in the capture of Arkansas Post against the 5,000 Confederate troops stationed there.

Arkansas Post (Fort Hindman) was a well-built, well-armed fort in a strong position on the bank of the Arkansas River. Its position allowed it to impede shipping on the Mississippi River as well as the movement of Union troops and supplies. The 31st under Col. Smyth in Hovey’s Brigade supported the 3rd Missouri in the assault on the fort “and bore itself with courage and credit.”

During the Fall of 1863, Humbert became very ill, suffering from typhoid fever and malarial poisoning. He was sent to a military hospital to recover and later rejoined his regiment. The effects of this illness stayed with him the rest of his life.

On 1 May 1864, as part of Sherman’s Army, the 31st Iowa started on the Atlanta campaign. They skirmished with the enemy on 9 May between Snake Creek Gap and Resaca, Georgia. At the end of 1864 Humbert wrote his parents that he had been paid, after a delay of eight months. He sent the money to his father to make use of as needed, and kept only $20 for himself. Solomon told his parents that he expected the army to make a “grand movement” toward the Gulf and requested that his parents not worry about him if they did not hear from him for a long time, as he was in “rugged health,” fine spirits and well clothed. The Cedar Falls Reserves’ took part in Sherman’s March to the Sea as part of the 15th Army Corps.

The next year, the Regiment began their final march toward Washington D.C. where they participated in the Grand Military Review. Along the route they were received with “great demonstrations of honor and exclamations of joy.” The 31st was mustered out at Louisville, Kentucky on 27 June 1865. The trip home was described in Since I Started for the War:

The trip back to Cedar Falls must have seemed uneventful after all the men had been through during the previous three years. They took the railroad to Davenport, Iowa where, on 1 July at Camp McClellan, they turned in their guns and equipment and received their discharge papers (or, as Humbert said, “ceased to be Soldiers.”) The next morning they took the steamer Muscatine from Davenport to Dubuque, arriving that evening. The following morning, 3 July, they hired five livery teams to transport the company of twenty men from Dubuque to Cedar Falls. They “swam, forded and crossed” many swollen streams and finally arrived at Raymond, Iowa the evening of 4 July. There they exchanged their livery team for an “Iron Horse,” and, in Solomon’s words, “arrived at Cedar Falls before sunset just two years and ten months since we started for the War.

Once home, Solomon resumed his role assisting on the family farm and later farmed his own land. On 21 November 1866, just months after his marriage to Addie Rose, Solomon purchased the S ½ of the NW Quarter, Section 7, Twp. 89, Range 14. He farmed until the winter of 1882-1883 when ill health forced him to move into Cedar Falls. He built a home at 923 West First Street where he lived the rest of his life.

S.B. took an active role in Cedar Falls community life. He was appointed to take the 1880 Iowa federal census for Cedar Falls Township and the State Normal School and in 1882 he served as crop reporter for the Iowa State Fair in Des Moines.

In 1883 Solomon Humbert became a charter member of the James Brownell G.A.R. Post #222 at Cedar Falls, Iowa and in 1897 served as Post Commander.

Humbert was a Main Street businesman from March 1883 until February 1888, under the names Parker & Humbert, Humbert & Cobb, and Humbert & Co.

He was an active supporter of First United Methodist Church throughout his life. In 1889, he was appointed Black Hawk County Supervisor and in 1891, he accepted the position of Cedar Falls postmaster and helped establish free mail delivery for Cedar Falls.

In October 1893, he partnered with his son Charles A. Humbert as a general merchant in Humbert & Son, again on Main Street, Cedar Falls.

In 1902, Iowa Governor Albert B. Cummins appointed Solomon Humbert to serve as a member of the Lookout Mountain Commission (the membership of which subsequently elected him Supervisor of Construction), to oversee the construction of three military monuments at Chickamauga and Chattanooga National Military Park: one on Lookout Mountain, one on the north end of Missionary Ridge (Sherman Heights) and, the largest one, with an overall height of 72 feet, on the south end of Missionary Ridge (Rossville Gap).

The octagonal base of the Rossville Gap monument includes four granite statues of soldiers at the corners. As Humbert prepared for the construction of this monument, he wrote progress reports for the Cedar Falls Gazette: “Chattanooga, June 4. Beginning with next week I expect to spend most of my time under the chestnut and oaks at Rossville Gap and see the monument go up. Nine carloads of granite are there all ready to be placed. One more car is to come. It is about 3 ½ miles out there and is on the road to Chickamauga park. This site is at the south end of Missionary Ridge in the gap where the ‘Iowa Brigade’ with Osterhaus division passed on [its] great flank movement to the rear of the ‘Ridge’ at the time of that famous engagement…” Multiple problems were encountered during the construction of this monument. At one point, due to a flaw in the granite, the 40-ton granite shaft fell, shattering the foundation and defacing the inscriptions already in place. Another accident occurred with the derrick, when a guy-rope broke and the boom fell and shattered….

In 1906, the Iowa General Assembly provided funds for a dedication trip by all the commissioners who worked to establish the monuments. A special train, complete with sleepers and dining cars, conveyed Governor Cummins and his staff, the commissioners, and speakers to four dedication sites. Superintendent Solomon B. Humbert, of Cedar Falls, was among the personnel of the official party, as were S.H. Rownd and Mr. and Mrs. E. A. Snyder, all of Cedar Falls.

Solomon was twice elected to the Cedar Falls City Council and served nine years on the Cedar Falls School Board, including a term as President of the School Board. During his time on the School Board Humbert issued passionate appeals to the community to be more interested in the local schools and schoolchildren. During Humbert’s tenure as School Board President, O.J. Laylander High School was built in 1900 on Main Street, named for Orange Judd Laylander, former Cedar Falls School Principal (1888-1899). Laylander wrote to Solomon on 4 Mach 1903 “Please extend…my heartiest appreciation of this act….Personally, no gift…in the power of the people of Cedar Falls could give me the pleasure that I feel in knowing that my efforts in the past were sufficiently worthy to cause friends to wish that my name should not be forgotten by the children.”

In 1909, Humbert was appointed State Oil Inspector, a position which was renewed regularly through 1924, when he was 82 years old.

In 1912, he was granted a patent on a new design for a railroad tie.

In 1922 Solomon Humbert was invited by Iowa Governor N. E. Kendall to attend the Dedication of the Lincoln Memorial in Washington, D.C. This must have been an important day for the 80-year-old soldier. To remember the special occasion, he added to his artifact collection a memorial ribbon featuring Lincoln’s portrait, the letter from Governor Kendall, the official invitation to attend the dedication ceremony, and his ticket to the event “Admit Bearer, Exercises Attending the Dedication of the Memorial to Abraham Lincoln, Potomac Park, 2:30, May 30, 1922.”

In 1924 when Jefferson school was demolished, Humbert rescued the first Cedar Falls school bell from the rubbish heap and had it refurbished to hang in Humbert School, built in 1903 at the corner of Pearl and First Streets and named in his honor. When Humbert School closed in 1984 the bell was transferred to the Cedar Falls Historical Society, where it can be seen at the Victorian Home and Carriage House Museum.

When Solomon died in 1938, his friend Roger Leavitt said,

“Cedar Falls mourns today the death of its most distinguished citizen. Compelled by infirmities incident to his 96 years to remain quietly at home in recent years, the younger generation hardly knew him. Fifty years ago he was one of the wheel horses on the street. He made a success of his business; he was active in local politics; he refused a nomination for mayor. For years he was president of the school board. He served as postmaster where he secured the local free delivery. He served the state on the Civil War monument commission. Though quiet and retiring he could be depended on in any position. He was a faithful member of the Methodist church. He was our oldest pioneer; the oldest and only surviving member of the G.A. R. post. He could be depended on to be on the right side of all civic questions. Cedar Falls is a better town because S. B. Humbert lived here.”