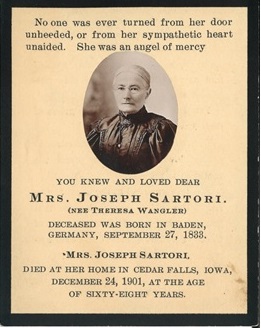 Theresa (Wangler) Sartori was an exemplary wife and mother. This was expected of every woman born in 1833. Her youth in Germany is largely undocumented except for the plain fact of her birth, as a daughter of Konrad Wangler, burgomeister, of Baden. At age 19, she attracted the admiration of Joseph Sartori, a young man learning the stonemason’s trade. However, her father refused to allow their marriage. Joseph immigrated to the United States, found work, and prepared a place for his sweetheart. When he wrote to her, asking her to come to the United States, she came and they were married in 1857.

They settled in the recently platted town of Cedar Falls and had two sons. The youngest, Ludwig, died tragically by drowning in the well of the Sartori home. The elder son, Joseph Francis Sartori, grew up in Cedar Falls. Theresa might have quietly filled her roles of wife and mother and gone largely unrecorded in Cedar Falls history. But she was a woman who believed in service to others in a way that made a lasting impression on her contemporaries and on the city of Cedar Falls. Theresa served for forty years as a member of the Ladies’ Aid Society of the German Evangelical Church and for twenty-one of those years as its President. She was also a member of the James Brownell Post No. 26 Womens’ Relief Corps and served on the committees for Outside Relief and Visiting the Sick. Theresa was a religious woman, but her commitment to helping the sick and the needy extended well beyond a mere lip service to religious teachings. The Cedar Falls Semi-Weekly Gazette of 6 June 1902 reminded their readers that Theresa Sartori “was a woman known by the entire community for her devotion to [the German Evangelical Church] and all those who came to her for aid or to whom she could go and give aid.”

This legacy of care giving was so much a part of who she was and how the community remembered her that the idea of care and succor and the name of Theresa Sartori cannot be separated. When she died at the age of 68, Cedar Falls mourned “the most sincerely Christian, the most unselfish, and the most charitable woman” they had known. Joseph Francis Sartori’s memorial to his mother was fitting. He gave the money for Sartori Hospital to be built. What better monument could have been erected to memorialize a woman who devoted herself to the care of her fellow citizens? At the dedication of the hospital it was remarked that the hospital would “continue the work so near to her heart, and will minister to the poor, the afflicted and the suffering until time shall be no more.” Theresa Sartori gave aid and succor to her fellow citizens to the end of her life, asking nothing and expecting nothing in return. Her service to her community inspired her son to build a community hospital—a hospital that has continued her work for 102 years.