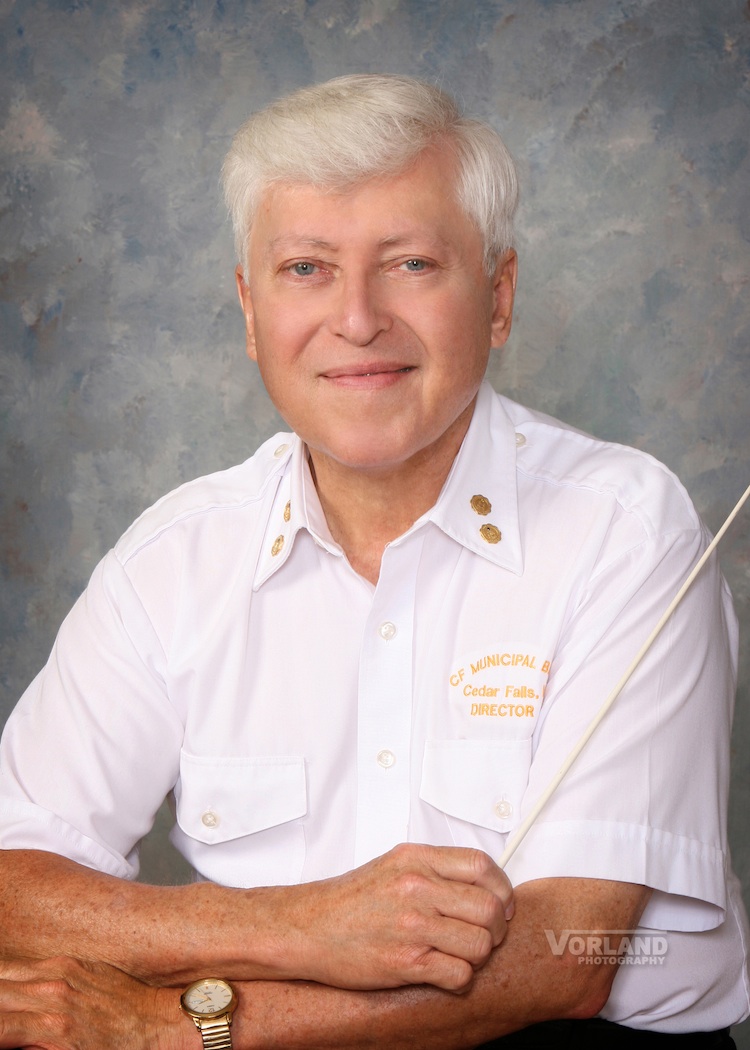 The Melendy Spirit Award is presented to individuals, families, groups, or organizations, both living and deceased, who have made outstanding contributions to Cedar Falls, positively affecting our overall quality of life through philanthropic or other means. The award is named for Peter Melendy who at age 36 became a Cedar Falls resident in 1859. By living fully and energetically, he contributed to our city’s cultural life and economic development. This year’s recipient, Dennis A. Downs, director of the Cedar Falls Municipal Band, superbly reflects the finest attributes of the Award.

Born and raised in Omaha, Nebraska, Dennis began his expansive music studies at age 4 at the piano; then by age 9, string bass; one year later, the trombone; adding cello at 13 and guitar at 14. The major incentive to study music performance, composition, and education was his high school band teacher, who was an excellent role model, providing Dennis with many opportunities to learn and grow. In high school, Dennis played trombone in a polka band and brass quintet, guitar in a pop trio, and cello in the school orchestra. The concert band performed his early compositions: Teenager’s Overture and a new school fight song The Red & White. Dennis continues to compose; his sentimental Beautiful Cedar Falls, written in 2003, is played by the Cedar Falls Municipal Band each season while the Overman Park crowds sing along!

Dennis earned undergraduate and two masters degrees, then taught instrumental music for 10 years in Nebraska schools, and one year in Lawrence, Kansas. When interviewed for a position in the Cedar Falls school system in 1979, he was impressed by the quality of the schools, the fine UNI School of Music, and the potential of the CF schools orchestra/string program. Dennis reflects: “It seemed to be a good fit at the right time in my career. It proved to be the right decision.” Indeed it was! Denis retired 29 years later in 2008.

However, Dennis’ contributions to our city extend far beyond all the students he nurtured. Joining the Cedar Falls Municipal Band’s trombone section in 1980, within a few years, then-director Tony Lund invited Dennis to become the Municipal Band’s conductor as of 1984 season. In accepting this new position, Dennis knew some changes were needed. Concerts were relocated from Main Street to Overman Park, weekly programs were shifted from Thursdays to Tuesdays, required auditions were initiated, and musicians’ pay was increased, But Dennis wasn’t finished with his initiatives! He adjusted programming and worked on improved funding from the City of Cedar Falls. Remarkably, the Cedar Falls Municipal Band is the oldest continuous municipal band in our state, being organized in 1891. And during its 129 years of existence, Dennis is only the 6th regular conductor since the Band’s founding, and he earned his 40-year membership pin this year!

The Cedar Falls Municipal Band’s payroll for each performance includes 44 Band musicians, Dennis, soloists, sound crew, and moving van personnel. The band organization is primarily funded through a portion of City tax revenue authorized by the long-standing “Iowa Band Law” since 1931. Additional support is provided by the Friends of Cedar Falls Band contributions. Dennis established the Friends group in 1993, when the band shell project began, to provide non-profit charitable organization status allowing tax-deductible donations to the band—a source of fund raising that continues to this day in addition to occasional memorial gifts; all gift funds most commonly are used for a select purchase, including music. Speaking for his band, Dennis is most grateful to have outstanding support. Every summer, Overman Park is filled with enthusiastic listeners of all ages every Tuesday in June and July, along with special concerts during Sturgis Falls Celebration and on Labor Day. Each year, Dennis creates a short-titled theme to reflect the character of that season’s programming, which is a mix of marches, medleys, overture, musical, soloist, reflective, patriotic, and novelty tunes. As Dennis says: “Something for everyone!” Programming for the Salute to Service concert near the 4th of July is always emotional with the addition of the AMVETS color guard unit, an in-kind tribute to the Band’s participation in AMVETS Memorial Day events for many decades.

Dennis has continued as a performing musician throughout the years, playing cello in symphonic and ensemble settings, including 14 years in the Waterloo Cedar Falls Symphony Orchestra, over 20 years in the Don Wendt Trio on back-up bass & guitar, and on trombone with the Sugar Daddys Jazz Band, among others.

Asked what he believes are his most significant contributions to our city as our Municipal Band director, Dennis mentioned four highlights.

First, and the most obvious visual impact to residents or visitors: the Overman Park band shell. Dennis inherited a portable stage trailer that had been in use for 35 years. It was limited in acoustics and lighting and was a challenge to transport and set up. In 1993, Dennis rediscovered a set of drawings for a classical band shell prepared in the 1930s by famed Waterloo architect, Mortimer Cleveland. The idea never went anywhere at the earlier time due to lack of funds. Dennis was enthused and contacted architects Wayne Snyder and Eric Ritland, obtained authorization from the Municipal Band board, and got a generously low construction bid from Bob Beck. Dennis then went to work and vigorously raised the massive funds needed to pay for the band shell, which was ready for its first concert in just three years. He proudly notes that no city or state taxes were used in building the band shell.

The second highlight, is the quality of soloists every week. Dennis comments: “We are so fortunate to have some of the best talent in the Cedar Valley from the UNI School of Music and Wartburg College faculty and students in our ranks and as soloists. We have a respectfully close relation with these artists, both professionally and personally. The wonderful results of their presence and participation are evident in our performances. Our audience members have made many compliments about the high quality we present.”

Last but certainly not least, Dennis noted “trumpeter Susan Rider has served a career in the famous U.S. Marines Presidents Own Band in Washington DC. Susan performs with the Band occasionally when she visits her hometown. We are incredibly proud of her artistic talents, service and dedication.”

Paul Rider, Susan’s father, who composed and directed Presidents Own concert march for the Band last year, and who has performed on the trombone in the Band since 1986, nominated Dennis for this award by saying: “The contribution the band makes to the quality of life in the Cedar Valley is extraordinary and exceptional in its impact and extent. Dennis has been responsible for its great success through his tireless efforts to maintain and enhance the quality of the musicianship of the band.” Former mayor Jim Brown’s nominating letter noted his joy as mayor in being the band’s guest conductor each year during the band’s Sturgis Falls concert. Mr. Brown wrote: “There is constant mention of Cedar Falls’ quality-of-life. There is no doubt the Cedar Falls Municipal Band, under Dennis’ leadership, is tops in this category. The quality of music is unfounded, especially as one recognizes the talent he assembles. His efforts to construct and raise funds for the Overman band shell will outlast most anyone alive today.” A letter of nomination also was received from Judy Larkin, president of the Municipal Band’s board and daughter of Dennis’ predecessor, Tony Lund. Ms. Lakin wrote: “In 2002, Dennis was able to move the Band’s rehearsals and Band Museum from the antiquated top floor of the old band building which had been located on Main Street since 1911 to a modern facility on Washington Street, easily accessible to those with physical limitations. This allows many of the old timers to continue playing in the band, while the Museum’s artifacts are now readily on view. The new band hall also has enhanced the quality of Cedar Falls by providing music teachers a place to give lessons; further, community groups use the facility for small group rehearsals, bible study groups, and music camps, just to name a few of its uses.”

How does Dennis react each summer, standing at the podium and looking over the crowds of enthused listeners? He reflects: “Our summer band concerts provide people a free low-tech way to spend some time in Overman Park, relaxing on lawn chairs, blankets, or benches with friends, listening to professional performers making beautiful music while munching on Rotary Club popcorn. There is a strong bond between our players and our many listeners.”

It is with great pleasure that the Cedar Falls Community Foundation presents the Melendy Spirit Award to Dennis A. Downs for connecting a community of all ages around making and sharing music.