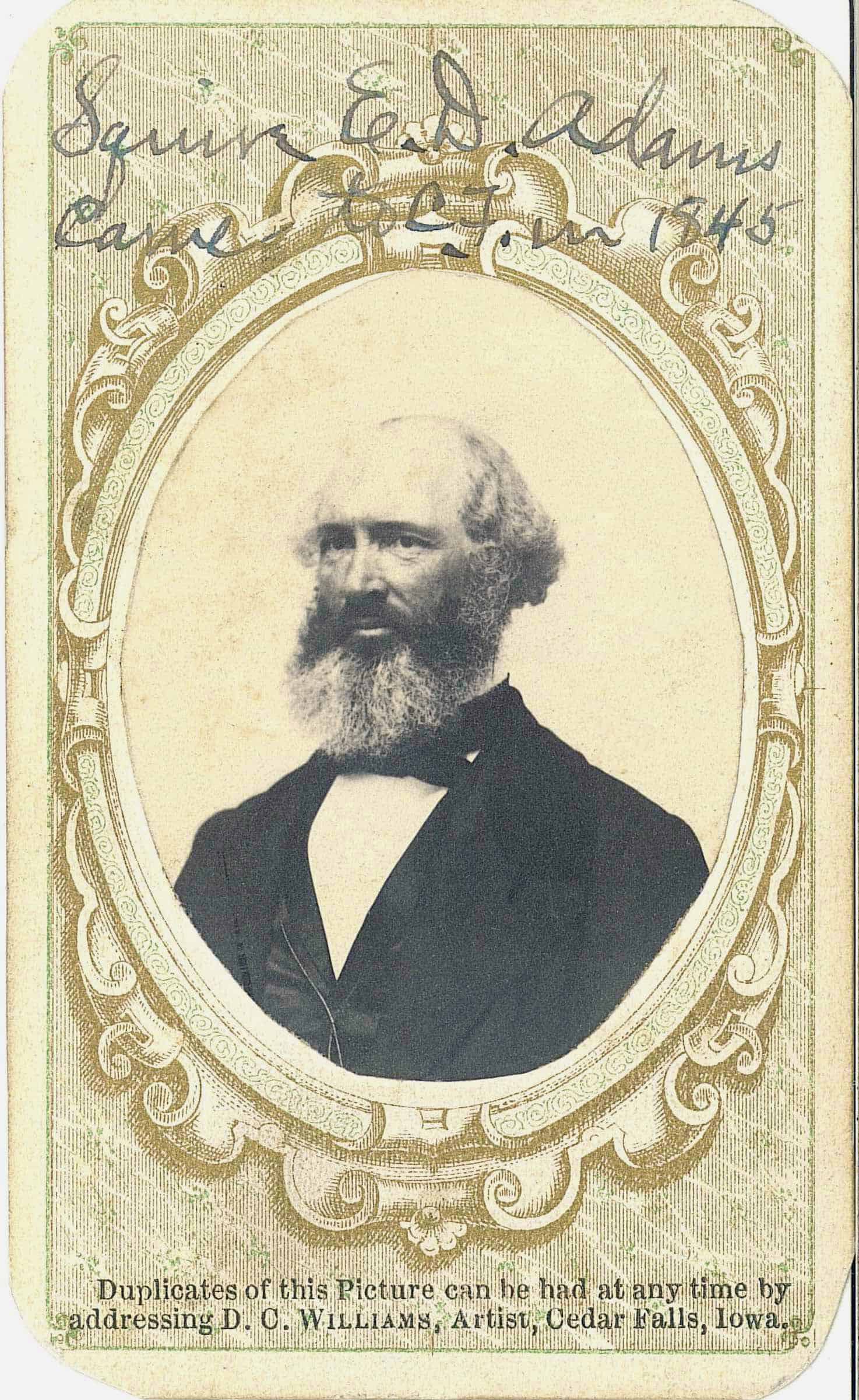 The founding of Cedar Falls is almost always attributed to one man, William Sturgis, who arrived here in 1845 and named the settlement Sturgis Falls. Sturgis however, was accompanied by his brother-in-law Erasmus Adams, a cabinet maker and school teacher from Ohio. Erasmus Adams, the other founder of Cedar Falls, had arguably more of an impact on the development of the community because he remained here for decades. Yet he is largely forgotten due to his role as “second settler”.

Erasmus D. Adams was born the last day of December in 1814, in Sumner, Oxford County, Maine, the son of Dr. Joseph Adams and Betsey Farnum. Erasmus was well educated, graduating the Methodist Episcopal Wesleyan Seminary in 1832. Soon after, he began moving westward, settling first in Cleveland, Ohio, where he made chairs, and then in Monmouth, Illinois, where he taught school. In 1841 he was in Iowa City, at that time the capitol of the Iowa Territory, which had been established in 1838.

In Iowa City, Erasmus met and married Catherine Sturgis, daughter of John Sturgis and Ardillacy Miller, and sister of William Sturgis. After their marriage, Erasmus and Catherine returned to Monmouth, Illinois, where Erasmus taught school for a year or more. In 1843 they returned to Johnson County, Iowa, near Solon where their son John Sturgis Adams was born in 1844.

The next year, William Sturgis and Erasmus Adams travelled north to Black Hawk county. Sturgis was in search of a site for a water powered mill; Adams apparently was more interested in farming. After scouting the area in March 1845, the two men and their families moved permanently to the site that would become Cedar Falls in September 1845.

Sturgis chose land near the river as well as higher land for a summer cabin – the hill on which Sartori Memorial Hospital now sits. Adams claimed land farther south, near Dry Run Creek, which was resurveyed for him in 1869. They both built log cabin homes and each cleared land. The first white child born in the county was Jessie Sturgis on October 1, 1846. She was followed just three days later by Henry Adams – another second place finish for the Adams family, albeit the first boy born in the county. These births increased the population of Sturgis Falls to 13. Sturgis, lacking money and manpower, sold his claim to John Overman in 1848 and moved to Minnesota. The Adams family remained for more than twenty more years.

Henry Adams, son of Erasmus, later wrote about their new home in the now-renamed Cedar Falls:

I remember hearing mother tell of their arrival at the new home, how delighted they were, how father went to the spring for water and brought back a nice fish, how they found in the thickets and woods the different wild fruits and nuts in abundance, also wild honey. The river was alive with fish and easily caught. It was indeed another “land of promise.” Then their first winter was mild, the oxen were turned out and lived in the bottoms. Most of the hay was left over.

Erasmus established his farm, and in 1846, gave part of his claim on the west to A.J. Taylor so that they would have a neighbor. Henry Adams recalled that Mrs. Taylor was a competent nurse; she would also become the first school teacher in Cedar Falls. Eramus gave the Taylor’s a garden spot on land broken the year before. Henry Adams recalled that “Mr. Taylor told me many years after that he never raised so much on a small piece of land as he did in that garden.”

Erasmus established his chair making business in his home, building onto the back of the cabin a space where he could run the foot-powered lathe. He made maple sugar every year for market, one year tapping over 900 area trees. In 1848 he was elected Justice of the Peace with G. W. Hanna of Waterloo.

In 1851 the town of Cedar Falls was laid out, and the next year Erasmus was given a lot on which he built a frame house, into which the family moved that fall, 1852. This would have been about 221 Main Street. The front room of the Main Street house was furnished with slab benches made by Erasmus, and Doctor Keeler taught school there. When the Cedar Falls School District was formed in 1853, Erasmus was elected Secretary, with Stephen A. Bishop serving as President and John Milton Overman as Treasurer. The District until that time had relied first on Mrs. Jackson Taylor, who taught school in her home, Dr. Keeler, and other community members to serve as teachers. In 1853 the District voted to raise “all the funds by tax that the law would allow”, but found this to be insufficient, so a subscription was circulated which raised the money for the first schoolhouse to be built. The school was 24×30 feet with a belfry and served 41 students between the ages of 5 and 21. In the meantime, Adams’ Main Street home served as a school room, stage coach stop, and inn for a few years.

Erasmus moved his chair making shop into an area mill, and used the income to pay off his land and build a new two-story home to replace the old log cabin. The family moved back to the farm in 1862.

In January 1853 the general assembly appointed commissioners to locate and establish the county seat of Black Hawk County. On June 9th 1853 the commissioners met at the house of E.D. Adams, in the village of Cedar Falls, and chose Cedar Falls as the county seat, the proprietors of the village donating 56 lots for the purpose of raising funds to erect county buildings. The lots were ordered to be sold at auction and on December 24th, 1853, 17 were sold, raising $243.25. One lot, now known as Overman Park, was given as “Court House Square” although no court house would ever be erected because, in January 1855 the general assembly, by special act, ordered that a vote be taken on the question of removing the county seat to Waterloo, which ultimately was successful.

In the early 1860s Adams was an active participant in the Lincoln & Hamlin Club (the fledgling Republican Party supporting Abraham Lincoln for President) and the Horticulture and Literary Society Club. In June 1860, he was part of the committee with Peter Melendy, Demsey Overman, Moses Chapman and Zimri Streeter, charged with planning a Republican Meeting for the Lincoln & Hamlin Club.

In 1862, the Cedar Falls Gazette touted the list of buildings being put up in Cedar Falls, noting “few towns in the State, if any, present a more lively or business-like appearance than Cedar Falls, and our future is as bright as that of any inland town in the state.” E. D. Adams, on Waterloo Road, in Adams addition was noted, as were others in Adams addition.

In 1866 the Gazette took a look backward at the early days of the settlement, noting the “first settlement” was made in March 1845 by William Sturgis and E. D. Adams, and that Mr. Adams was still a citizen of Cedar Falls.

In 1870 Erasmus advertised that his “old premises” on Waterloo Road would be sold, including stock, farming utensils, and household goods. The Adams family was intent on moving south for the health of Erasmus and his aging wife.

Erasmus Adams died in 1901 in McAlester, Indian Territory (Oklahoma) where he and his wife had moved to be close to their only daughter, Ardillacy. Their son John would end his days in California, while sons Henry and Amos died in Arizona. Erasmus Adams’ sister-in-law, Hannah Sturgis Miller, was still living in Black Hawk County in 1900, and in April 1900 Erasmus D. Adams deeded to her land in Section 18, Township 89 North, Range 13. This would seem to be his original homesite.

Pioneer settler, farmer, businessman, school board member, justice of the peace, club member – E. D. Adams was an active participant in building the community of Cedar Falls from 1845 until 1870. Cedar Falls was shaped by his participation.